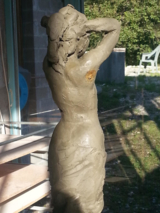 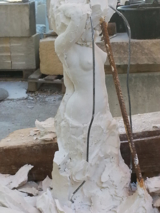 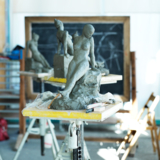 This one-week course offers the possibility of modeling a figure from a live model and to subsequently cast it in plaster. Thus two learning themes are combined: firstly, the figurative design focussing on the anatomy and secondly the casting technique of the ‘lost form’ in plaster. This week’s course is aimed at course participants who are experienced as well as inexperienced in the field of figurative design.

During the first three days we concentrate mainly on figure modeling. Alongside there will be theory slide-in modules and anatomy teaching. We look on the anatomy part as being the third part of a gradual build-up. In previous courses we have already dealt with themes such as ‘The playful figure design’, ’my naturally trained anatomical eye’ and ‘the three volume forming skeletal parts, chest, pelvis, head and their position to each other’.
This year we devote ourselves to the ‘leg’, repeating at the same time exercises of previous topics.
We will then cast our modeled figures by using the timeless technique of the ‘lost plaster negative form’. It will be possible to cast the positive in plaster, hard plaster or cement, depending on size and shape.
The plaster figures will be removed during the course, whereas the cement versions need to be done at home when they are completely dry and hard.
As in previous years the figure can be used as a model for a stone sculpture in next year’s course ‘Stone sculpting for advanced persons and beginners’. Course tutor: Thomas Hunziker.

There will be an additional charge of CHF 50.- per person for the model (female).

This course is convenient for beginners and advanced students!